The “Global Special Operations Forces (SOF) Foundation holds its fourth European Symposium in Brussels, from October 1 to 3. SAES participates as a reference company in naval mines for special operations forces and shows a mock-up of a MILA unit.

MILA is an underwater demolition charge for Special Operation Forces that incorporates a computer-controlled detonation system. It is used by combat divers in covert underwater operations to neutralize threats. It is a safe, efficient, and lightweight device, easy to transport, deploy and install. One only diver can transport and fix two MILA units. In addition, the device can be quickly installed and reprogrammed in underwater, even in adverse scenarios such as low visibility or in darkness. It is designed for fixing underwater to different types of surfaces, makes it a very versatile tool for high demand operations.

Representatives from Australia, Belgium, Denmark, France, Hungary, Italy, Lithuania, the Netherlands, Poland, Portugal, the Republic of Malta, Romania, the United Kingdom and the United States have attended. It is remarkable the presence of the Head of Belgian Defense, the President for the EU Military Committee and the Deputy Secretary General of NATO for emerging security challenges. A variety of topics such as “Military reform and capabilities packages for modern warfare” and “The role of artificial intelligence in SOF” has been discussed during the conferences. 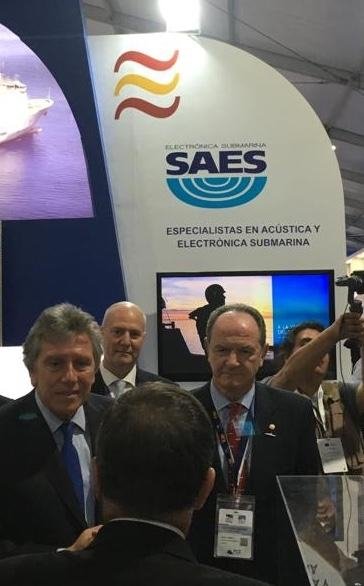 SAES, who exhibits their solutions in a shared-stand together to Navantia, has been visited by the Chilean minister of Defence

SAES is participating at the Exponaval International Naval & Marine Exhibition and congress for Latin America, from 4th to 7th December in Valparaiso. The company exhibits together with Navantia in the stand 124a.  SAES is the only Spanish company that designs and manufactures anti-submarine warfare systems for all-type of ASW platforms. SAES is internationally renowned in this area. Furthermore, the company is at the forefront of the market in underwater signatures measurement and management.

The operative concept of ASW missions has changed due to the emergence of new naval and aerial platforms and the fact the naval forces involved in ASW missions operate closer to the coast. 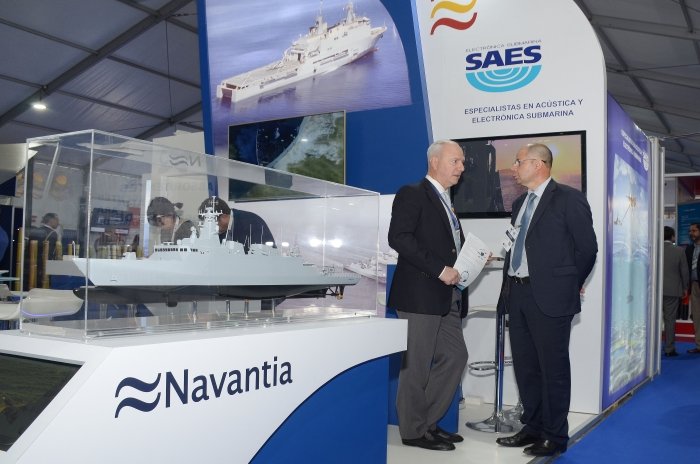 SAES, based on its wide experience, provides different ASW systems, which are capable of processing digital sonobuoys as well as multi-static processing, in order to improve the threat detection rate.

SPAS system is a solution for MPAs. It is an acoustic system to detect, localize and track submarines and surface ships based on analysis of acoustic signals acquired by deployed passive and active sonobuoys both analog and digital versions. SPAS system works totally integrated into the Tactical Mission Center.

ROASW system is the solution indicated for naval warships and helos. Besides of being an powerful acoustic processor, ROASW provides interoperability among different platforms (surface ships as frigates or corvettes, helicopters, UAVs,etc.) achieving an common operations scenario among all the resources deployed.

Specifically, ROASW and SPAS systems have been commercialized besides of Spain, in Brazil, Chile and Swedish.

SAES is also experienced in Signature Intelligence and provides systems for MCM platforms.

For instance, MIRS is an advanced portable system that obtains the complete signature (Acoustic, Magnetic and Electrical) of a submarine or surface ship. Furthermore, MIRS can be used to as a discrete device to gather Underwater Signature Intelligence Information or as a tool to verify the ship-signature levels before a mission.

I International Meeting on Knowledge and Blue Growth, organized by the University of Cádiz (UCA) and the CEI-Mar Foundation.

InnovAzul 2018 took place in Cádiz on November 29 and 30. It is an international innovation meeting in the productive sectors of the Blue Economy, where more than 130 Naval and Offshore Construction companies and 600 specialists in this field.

The main objective of InnovAzul is the promotion of public-private competitiveness towards a circular economic model and sustainable development. InnovAzul is an essential meeting point for companies demanding technologies, administrations, knowledge generators and technological agents, for innovation and socio-economic development in the marine-maritime sectors.

Simultaneously, the attending firms were able to schedule up to 30 bilateral meetings with other participating companies related to their interests.

In this sense, SAES held meetings with universities and consulting companies in order to collaborate in environmental impact studies to require measurements and analysis of submarine noise. In addition, SAES provided information about the DDS to companies in the security sector and representatives of port authorities. It was also presented SOURCE-MAP systems, a tool for generation of noise maps, capable of evaluation of the radiated-noise by their facilities.

The wide participation in the event, more than a thousand attendees, gave the opportunity to SAES to communicate its capacity in tasks related to the measurement and estimation of underwater noise and the protection of critical infrastructures of submarine threats.

SAES exhibits their solutions in a shared-stand together to Navantia and offers a presentation entitled “New trends in naval mines”.

SAES has participated in the INDODEFENCE Expo and Forum that is held at Jakarta from 7th to 10th November 2018 and hosted by the Indonesian Ministry of Defence. The company has done technical product presentations to countries’ delegations that has visited its stand and has offered a conference aimed to deepen in Naval Mines knowledge.

The challenge on Naval Warfare makes SAES to continuously develop solutions to face them. SAES naval mines are capable of being activated by magnetic, electrical or acoustic influences, improving the efficacy for protecting and controlling strategic areas, straits and other force-used maritime zones.

In order to the military personnel being familiar with naval mines and understand concepts like multi-influence ship signatures, the company has developed a naval mine for training. This training naval mine allows to the crew knowing how smart naval mines work and how to prevent damage from them.

SAES also offered specialized training for understand how the ships are “seen” by the mine or how the naval mines can be programmed. The family of MINEA products comprises three types of naval mines: cylindrical bottom mines, conical shaped shallow-water mines and moored mines. All of them use a variety of sensors to detect different physical influences.

To program a smart naval mine it is needed to own signature intelligence of a ship, which includes the electric, magnetic, pressure, seismic and acoustic radiation. Besides MINEA training version, which can record and store this information, the company also offered a more specific system: MIRS.

Three of the studies are focused on the search for a function that allows to estimate the noise radiated to the sea by ships as a consequence of the vibrations existing in the ship hull. The other study analyzes the acoustic and non-acoustic underwater pollution produced by ships and other types of human activities on sea.

The studies have been presented at the 49th Spanish Acoustic Technician Congress in Cádiz, which was held simultaneously with Expoacoustic’18. SAES shown their products and services at the exhibition as the only reference in underwater acoustics in Spain.

Collaboration between SAES and the University of Alicante.

The previously referred studies has been carried out between SAES and  the University of Alicante and they were presented from 23th October to 25th.

First day the studies entitled “Vibroacoustic behavior of cylindrical containers in air” (16:50 h. ROOM 3) and “Vibroacoustic behavior of cylindrical containers in water” (Day 24. 17:10 h) were defended by Francisco Javier Rodrigo Saura, SAES specialist in signal analysis and processing, and also by the scientists of the University of Alicante Pedro Poveda Martínez, Jesús Carbajo San Martín, José M. Requena Plens and Jaime Ramis Soriano. In these works it was described the experimental procedure carried out to study the radiant behavior (in air and in water) of a semi-cylinder shape  structure made of several materials. The  level of vibration and sound pressure of the shapes were evaluated in a plane close to the source. These studies are necessary to extrapolate them to more complex geometries and thus be able to determine a relationship that allows to predict the noise radiated to the sea by a vessel as a consequence of the vibrations in the hull. This issue is studied more closely in the study “Quantification of acoustic noise radiated by ships through its hull” which was exposed on Day 26 at 9.30 in room 4.

On the other hand, on day 25 at 17.10 also in room 4 was be shown the paper “Analysis of pollution of acoustic and non-acoustic origin in marine environments” written by SAES engineers Esther Moya de Rivas, Francisco Javier Rodrigo Saura and Antonio Sánchez García.

This study deepens in the evaluation of the acoustic and non-acoustic underwater pollution, estimating the environmental impact at sea. In addition, real values are presented for the quantification of pollution due to the radiated energy. The measures were obtained  in situ by MIRS system in campaigns of long duration.

The MIRS is the system used to measure the emissions of vessels.

The SAES Multi Influence Range System (MIRS) for surface vessels and submarines provides real influence measures (magnetic, electric, pressure, acoustic, and seismic) in a real and controlled scenario, to successfully counter related threats. MIRS is among the best systems in the world in its class and compared to fixed stations. A decisive advantage of the MIRS system is that, due to its portability, low weight, low power consumption and high performance, can obtain all signatures of the ship in different geographical locations.

MIRS is also a tool for testing and calibration of:

SAES has participated, from September 25th to 27th, in two international exhibitions: Global SOF Symposium, the international conference specializing in Special Forces, which took place in Madrid, and ADEX (Azerbaijan International Defense Exhibition, for its acronym in English ) that was held in Baku.

At SOF, the company focused on the underwater demolition charge MILA and the Diver Detection Sonar DDS-03 systems. Both products were special interesting for a number of representatives of the Special Forces attending the conference. Specifically, SAES was visited by both the Major General and the Commander of the MCOE (Joint Special Operations Command) and the Nato SOF HeadQuarters Commander. Also representatives from foreign countries such as Sweden and Ukrained visited the stand.

DDS-03 can detect divers or other underwater intrusions, like underwater vehicles.These types of underwater threats can be easily circumvented. The solution is to incorporate diver detection sonar into the surveillance system of those military and commercial ports, power stations or petrochemical plants, oil platforms, anchored ships and other high-value assets with access to water mass.

MILA MILA is an underwater demolition charge that incorporates a computer-controlled detonation system. It is used by combat divers in covert underwater operations to neutralize threats. 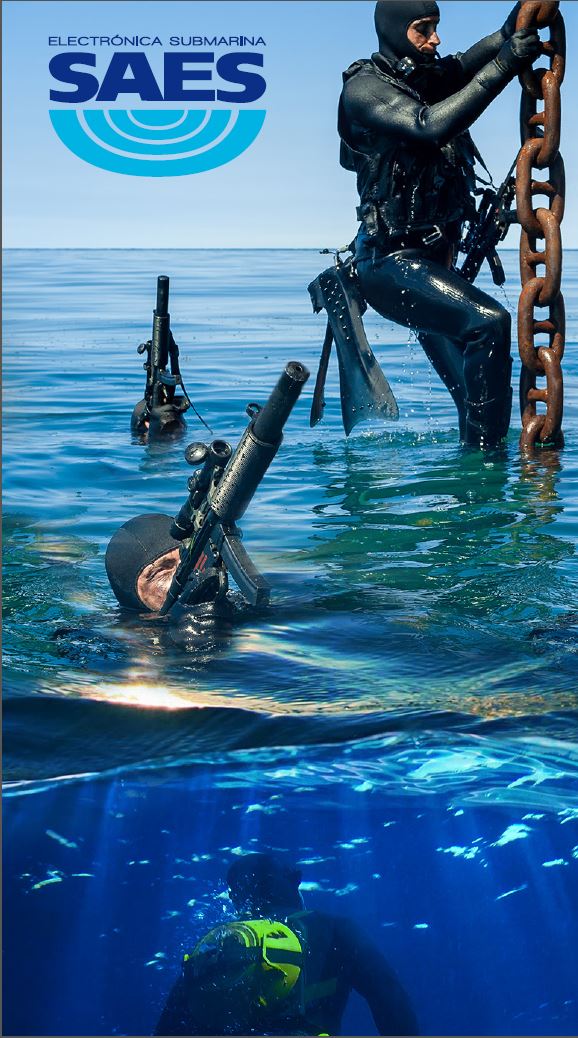 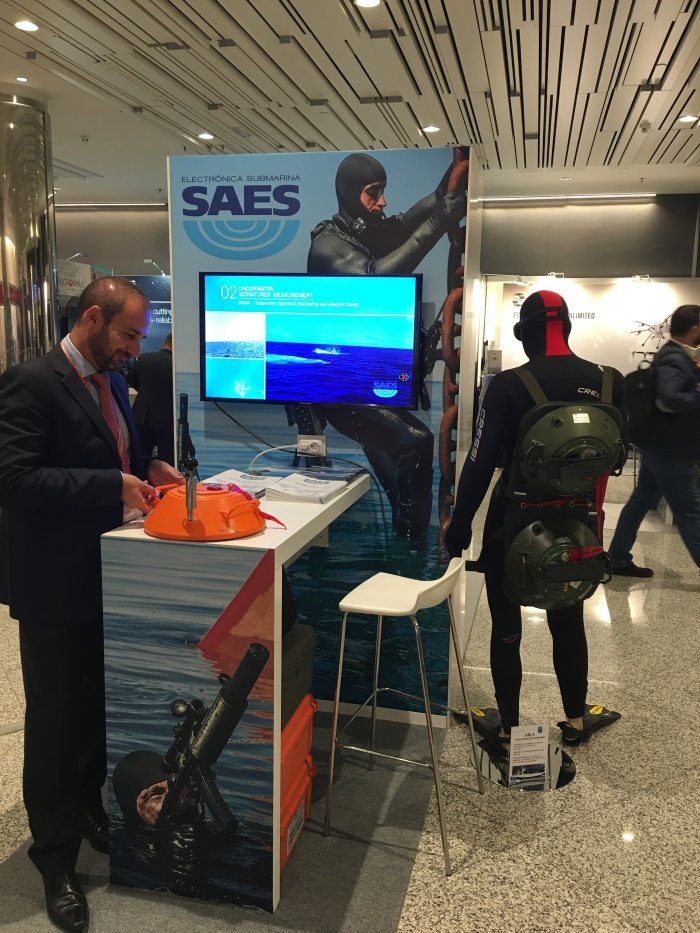 At the Azerbaijan exhibition, ADEX 2018, SAES presented, besides the previously said DDS-03 and MILA, the product line focused on MCM warfare: the MINEA naval mines and MIRS Multi-influence Range Systems.

MINEA naval mines are the most advanced smart marine mines manufactured today. They are intended for training minesweeper crews. Knowing how an advanced smart mine works is essential to the safety of the vessel.

SAES team met to naval officer and representatives from countries in the Caspian region such as Russia, Kazakhstan, Azerbaijan and of Saudi Arabia, the United States, Malaysia, Egypt and France. 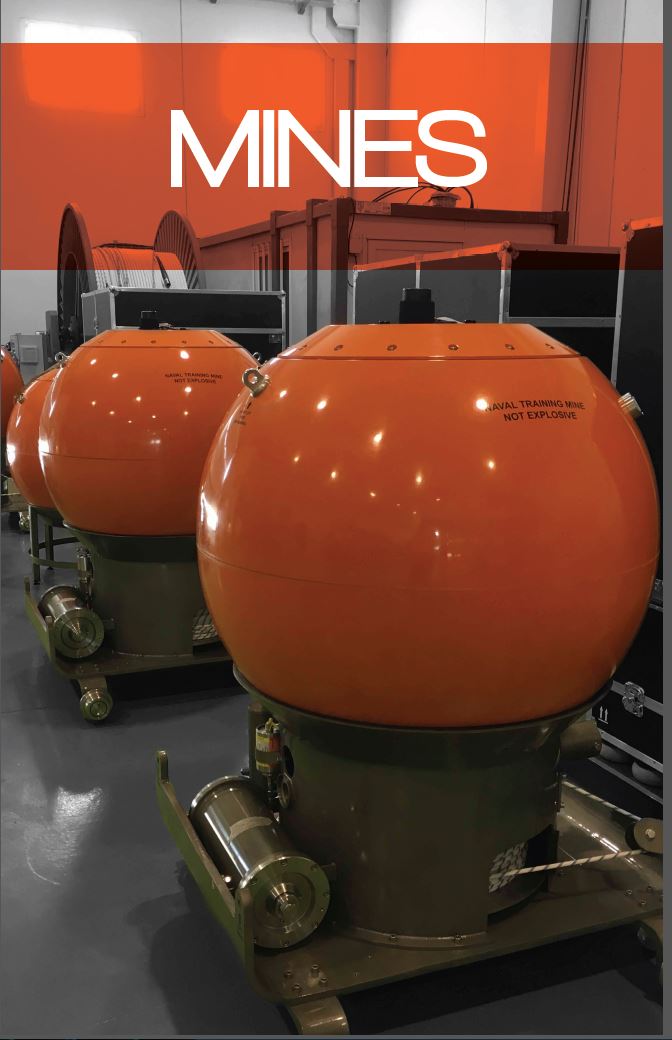 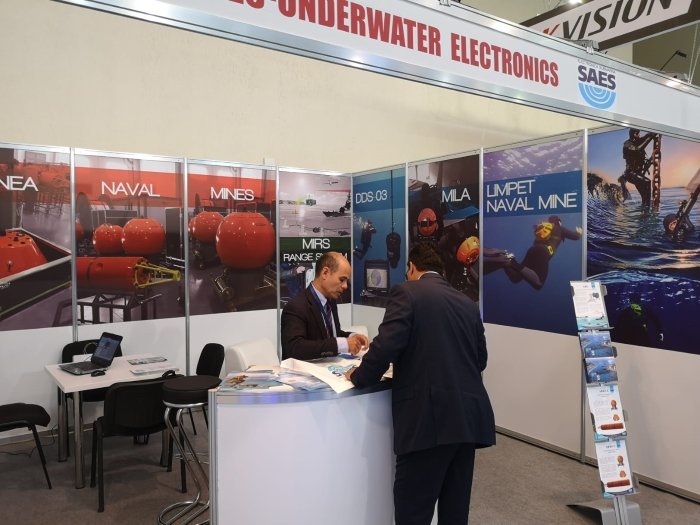